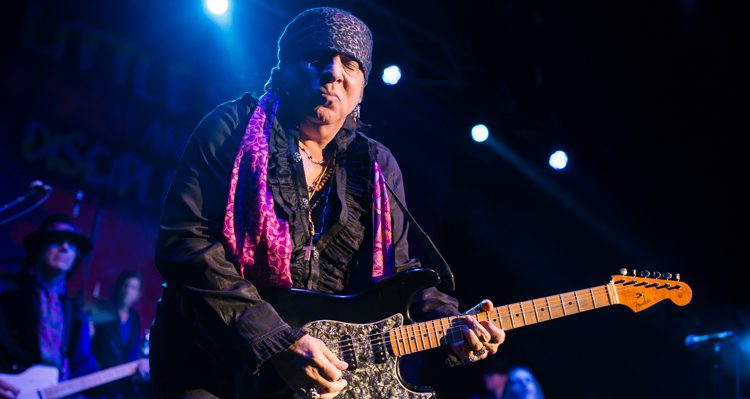 When I hear Andy Gibb’s I Just Want To Be Your Everything, it brings me back to the summer of 1977. I spent almost every day at the beach, and the rest of the time listening to the radio or watching television for news about the Serial Killer Son of Sam. Of course, that was also the summer of the great New York blackout.

While you may not specifically care about my summer in 1977, it drives home the point that music is the Soundtrack of Our Lives. What better way for kids to learn about history than by listening to music of the time? That finally leads me to the focus of this article. Little Stevie Van Zandt and the Disciples of Soul have released Soulfire Live! This release comes as the band embarks on a major tour benefitting TeachRock, The Rock and Roll Forever’s national initiative to bring music curriculum into middle and high schools across the country. (The Rock and Roll Forever Foundation is a 501(c)(3) established by Stevie Van Zandt).

The focus of Un-Block The Music, is to expose everyone to all kinds of music. That’s not only for the love of music, but for the love of humanity. Understanding music helps you understand a culture and its people and their history. The program is the epitome of that vision. There are English lessons included as well. It’s a true interdisciplinary approach to education. I had the good fortune to speak to Stevie between gigs about his program goals!

TeachRock started about a decade ago when the National Association for Music Education (back then called MENC) asked Stevie to go to Congress. It was not long after the No Child Left Behind Act was signed into law. He went to Congress and spoke with Massachusetts Senator Ted Kennedy and Kentucky Senator Mitch McConnell. “I said, the No Child Left Behind Act is devastating the entire art world. I asked them to fix it. They said, ‘it’s not going to happen.’”

So, Stevie went back to the teachers and said, “We are not going to win right now. We are not going to be able to put instruments in kids’ hands, but let’s go in a side door and visit music history, and we can reach more even more kids. Every kid is into music. We can create cross curriculum lessons. We can do a history class, a music class, an English class, etc. They endorsed that idea. I outlined 200 lessons including the history of music starting from the early 20th century. We have about 120 lessons up at TeachRock.org. We meet all of the state standards. It is not just an afterschool program.”

TeachRock has another dimension as well.  “We started partnering with documentary companies and have continually been refreshing the whole curriculum and developing educational materials to accompany the films. We partnered with Ron Howard for The Beatles: Eight Days A Week—The Touring Years. We partnered with Dave Grohl and HBO for Foo Fighters: Sonic Highways and are now working with Rumble Filmmakers with Rumble: The Inidians Who Rocked The World. We will use scenes from their movies and do lesson plans based on the movie.”

Stevie does not rest there. He has decided to add his live show as a component. His show, of course, is pretty much the history of rock and roll.

In addition to educating kids, Stevie says, “We also want to show solidarity with the teachers who are underpaid and underappreciated. We want to show support to striking teachers in West Virginia, Kentucky, Arizona and elsewhere.”

Sidebar: About the Album

Soulfire Live! is a 24-track collection recorded on tour last year in North America and Europe. It’s available now digitally and through streaming, but this summer there will be a physical 3-CD set, a Blu-ray and vinyl editions as well. Every configuration will have something extra.

Music highlights on the album are the original songs throughout Little Stevie’s career including Standing In The Line Of Fire and I Don’t Want to Go Home alongside a number of favorite covers like The Electric Flag’s Groovin Is Easy and Etta James’ Blues Is My Business.

This album was produced and arranged by Stevie Van Zandt, mixed by Bob Clearmountain and mastered by Bob Ludwig. The best of the best! “I record on my own label in a big old school studio. We use tape, we have a Neve mixing console. I have always done it this way, and I always will!,” Stevie said.

For tour dates, go to http://www.littlesteven.com/.