“Do What You Love and Do It Very Loudly.” That is Jennifer Ashley Tepper’s best advice. Who is she?  Author of The Untold Stories of Broadway book series. She is Creative and Programming Director at the esteemed Feinstein’s/ 54 Below (a venue in Manhattan for A-list performers focused on theater). Aside from that, she is excited to announce the opening of her first off-Broadway show, Be More Chill.  All of that, and she is only 32 years old!

Let’s start from the beginning. Jennifer grew up in Boca Raton, FL, but always had her heart set on New York City.  “One of the assets of Florida is that it has so many snowbirds and an elderly population that enjoy the arts and it trickles down to the young people. My high school had a 1200 seat theater where we would sell out 8 performances of our show.” The school had money to not only have outstanding productions with outstanding sets, there was also money left over to send the students to competitions. “We were very lucky.”

When it came to choosing a college, Jennifer says it was New York University or bust. Well, she got in, and has been in Manhattan ever since. “I feel like I am doing all of these things that are exactly what I wanted to do, but none of these jobs or majors existed when I was going to college. I pursued the things I loved, whether that was theater history or new musical theater, and I knew that would turn into a job.”

Since there were so many things she wanted to do,  Jennifer took the initiative and had a lot of internships and also started creating her own stuff in school and out of school. “I started working with the writers of the musical, (title of show) when I was still in school as an intern. When the show went to Broadway, the director hired me as an assistant. I had all these amazing connections that I made in school that helped launch me into this special world,” she says.

In addition to internships, Jennifer says she volunteered for everything, just putting herself out there. For two years after graduation, she could not get a fulltime job in the theater. Even though she struggled, that ended up being an asset too. She spent that time creating her own concert series.

Jennifer’s first fulltime theater job was for Tony award-winning producer Ken Davenport (who by the way is nominated again this year for the revival of Once On This Island).  She met Ken when working with her friend, composer, lyricist, book writer, Joe Iconis on one of his shows. “I was doing creative marketing and audience outreach and Ken saw what I was doing and said, ‘I want to hire you to do exactly what you’re are doing for my show.’” Up until then, she had been applying for jobs and never was exactly right for any of them. This job was created for her.

“I worked for Ken for three years. Godspell was the main thing I did with him. That was all encompassing. We did everything from being involved with investors, to marketing, to group sales, to casting, and beyond.”

At the same time, Jennifer and Joe Iconis created Christmas Extravaganza. They had been staging it at Ars Nova Theatre, but one year they had a booking issue and it wasn’t available “so Joe and I said, we should see if we can do it at that cool new venue that opened, 54 Below.”  It all came together there, and a couple of months after Jennifer was sought after by the owners for a job as their creative programming director where she puts together 18 shows a week!

That’s not all. Jennifer is the author of the eventual six-book series, The Untold Stories of Broadway (published by Dress Circle Publishing).  “When I was first starting out, I was very in touch with underappreciated musicals and my friend Kevin Michael Murphy and I decided we would put together an evening that celebrated them with the actors that originated the roles. We wanted to include photos and stories from the shows as well and make it a history night.  One of my now publishers came to the show, thought it was cool and original and asked if I wanted to pitch a book.”

That book became a series of books about all of the Broadway theaters, their history and their tales. Three volumes have been published so far. “That one summer I was writing my first book was absolutely bonkers. I was doing interviews all day long. I was also leaving my job with Ken at the same time. Had to wrap that all up and train my replacement. I was also starting my new job which was all encompassing. It was a monstrous time!,” she laughs.

The fourth book in the series was supposed to come out at the end of this year but has been pushed until 2019 because some other exciting things have come into play. Jennifer is co-producing her first off-Broadway show with Jerry Goehring (producer of A Christmas Story, the musical).  The show, Be More Chill was written by her friend Joe Iconis.

Be More Chill played in New Jersey three years ago.  It did great, and there was even a cast recording. “Then, it sat there for a while, and over the last year or so, it became an internet viral sensation. The album has 100 million streams. To put that in perspective, Waitress has 89 million streams. Last year, it was the #2 most talked about show on Tumblr after Hamilton and before Dear Evan Hansen,” according to Jennifer.

Be More Chill will be at The Signature Theatre on 42nd St. for a limited summer run. Previews start July 26 and the show runs until September 23.

And….. just one more thing on Jennifer’s plate, The Jonathan Larson Project. Although Jonathan Larson died in 1996 (the night his Pulitzer Prize winning show Rent opened on Broadway), he wrote a massive amount of songs and thankfully left behind a collection of demos. That music will be performed in a concert at Feinstein’s/54 Below in October, produced by Jennifer.

Whew! And since this is a blog, and not The New York Times, I can editorialize. Jennifer Ashley Tepper is one of the most upbeat, personable, humble people you will ever meet, and I look forward to all that she does in the future.

Sidebar: Theater Is A Circle 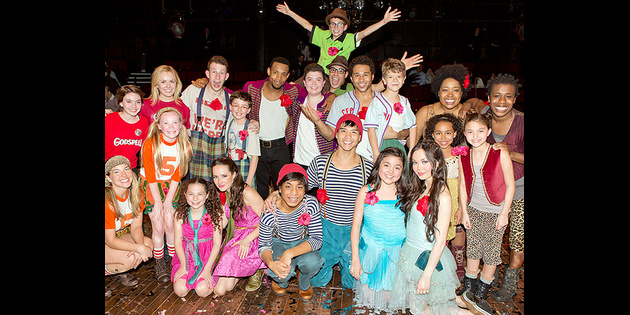 Casts  of Godspell and Godspell 2032

Just a few fun facts I would like to share about the small circular world of theater. In 2012, my daughter, Holly Block, went on an open-call for the cast of Godspell 2032 which was a one-night only kid’s performance of  the Ken Davenport produced Broadway show Godspell, which, of course, Jennifer Ashley Tepper worked on. It played at Circle In The Square Theatre. Among the many fabulous actors in the show, at the time, were Corbin Bleu (High School Musical), Uzo Aduba (Orange Is The New Black ), Lindsay Mendez  (Carousel) and George Salazar ( Be More Chill).

Holly did make it into the kids cast which starred Gaten Matarazzo. Yes, the same Gaten that is in Stranger Things.! It also featured John  Viktor Corpuz who went on to star in The King And I, Analise Scarpaci and Zoe Considine who were featured in A Christmas Story, and Grace Capeless who was not only in A Christmas Story, but The Lion King.

As for Holly, Godspell 2032 was the start of her musical theater path and she since surpassed college to attend the acclaimed The Circle In The Square Theatre School which is housed in the basement of the theater. Alumni include Idina Menzel, Lady Ga Ga, Kevin Bacon and Phillip Seymour Hoffman to name a few.

To top it off, Ken Davenport’s current revival of Once On This Island, nominated for 8 Tony Awards, now playing in Circle In The Square Theatre. (I have an interview scheduled with him later this month look out for it!)

Circle In The Square is very different than other theatres because there are seats all around the stage. It’s a circle….just like the theatre world!

11 thoughts on “Jennifer Ashley Tepper: “Do What You Love and Do It Very Loudly””