Depending how you look at it, I either have the best timing or the worst. “Un-Block The Music” had the great pleasure (and honor) of interviewing Joe Iconis on August 29. That was just a few days before it was announced that “Be More Chill,” (the musical that was an internet sensation for which he wrote the music and lyrics) is going to finish its record-breaking run off-Broadway this week and reopen at the Lyceum Theater on Broadway in February 2019.

Of course, I am thrilled about this show for so many reasons, but above all I am excited that those who don’t know Joe will discover him. While there have been other composers known for their performing (eg. Marvin Hamlisch who wrote “The Way We Were” and one of my favorite Broadway musicals, “They’re Playing our Song”), it’s not often that a stage persona is as entertaining as Joe’s. His concert act, Joe Iconis and Family, frequently plays Feinstein’s/54 Below, The Laurie Beechman Theater, Weston Playhouse, and other venues around the country. It’s part rock, part classic show tunes and singalongs, and it involves some amazing friends. Check out the August 16 performance by Eric William Morris who is soon to open on Broadway in “King Kong” (https://www.youtube.com/watch?v=G5cHynVO2-I&feature=youtu.be ).

Joe told me, that performing aspect of his career is something that has grown the course of his career. “I have fallen in love with it. If I could have told my younger self that I would be comfortable playing and singing on a piano in front of an audience, I never would have believed it!”

So, how do these cabarets and concerts lead to Broadway? The “Be More Chill” phenomenon started when Joe’s agent brought him the novel. “Usually it takes a while to get me thinking about musicals, but I could see this right from the start.” Two River Theater in Red Bank, NJ, decided to commission the show. The premiere production happened in the spring of 2015. The show’s popularity happened with the cast recording, he says. “People started actually buying the album.”  He asked one of the stars, George Salazar if he was promoting it somehow, but he wasn’t. He asked Joe the same question.  His answer was “no” as well. The popularity of the show was organic and grew naturally! Then, came the amazing internet following which ultimately lead to the off-Broadway sensation.

Joe hooked up with producer, Jerry Goehring (“A Christmas Story”) who really believed in the show and wanted to take a chance on it. From there, Joe went to his good friend and collaborator Jennifer Ashley Tepper to produce the show as well. As I have been developing this blog, I have found so many connections to people I know and want to know. I wrote about “Be More Chill” as part of an article I did on Jennifer Ashley Tepper a couple of months ago. Jennifer told “Un-Block The Music” that she always knew she and Joe along with their “Family of collaborators were planting seeds with different projects and that eventually, the right combination of circumstances would pull together to allow us to explode onto the New York theater scene like this.” 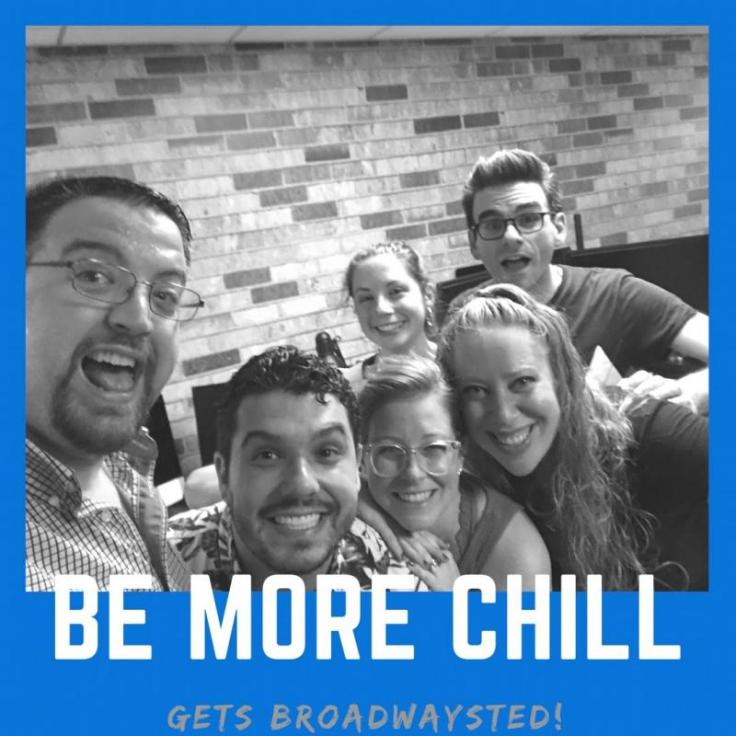 Beyond all of  his talent, what I loved about talking to Joe was that he was so friendly. I asked him…”How did a nice Italian kid from Long Island get to be the toast of Off-Broadway and ultimately Broadway?” Family support, he said. While his family is not musically inclined, they supported his love of music. “Little Shop Of Horrors” was the musical that hooked him on theater. “I knew from the time I was in middle school that I wanted to be a musical theater writer. I always thought I would be a composer. I really approached this from a musical place at the start.”

At NYU, Joe worked with a composition teacher. “I needed songs with lyrics in them, so my choices were to find a lyricist to work with or to try and write lyrics myself. I was a shy young man, so the idea of having to go up to someone and having a conversation then collaborating on lyrics was so horrifying. I thought doing it myself was a much better idea. I started writing lyrics for real in those years. By the end of college, the lyrics were just as important to me as the music.”

The first show Joe ever wrote in full was “The Black Suits,” it never had an actual production in New York City although it workshopped at the Public Theater with Krysta Rodriguez (“In the Heights,” “Spring Awakening”) and Nick Blaemiere (“tick, tick…BOOM!,” “Godspell”). It also workshopped at the Barrington Stage Co. in Pittsfield, MA with Will Roland (now in “Be More Chill”) and Ben Platt (“Dear Evan Hansen”). Its world stage premiere was at the Center Theater Group in Los Angeles.

Joe is in awe of the fact that ‘Be More Chill’ is a part of the large national cultural conversation. “This hasn’t happened in a long time.” Leading up to the summer, Joe just wanted to be able to do this show in New York City.  “I worked on so many shows out of town. I knew it would be so amazing to run it in New York. I didn’t want to put anything on it. I didn’t want to feel like it was a stepping stone. I just wanted to enjoy it.” But it all exploded!

“The moment I knew Broadway was happening I was in absolute disbelief. I could not believe we got there the way we did. Still can’t. The fact that our show has traveled the path it has and is going to open on Broadway in February has restored faith that I didn’t realize I’d lost. It makes me feel like anything is possible. Can’t wait to take 45th Street by storm.”

“’Be More Chill’ was brought back to life because people genuinely responded to it all over the world, and listened to it and loved it in unprecedented numbers. It feels unbelievable – but also exactly right,” Jennifer agreed.

So, now Joe has a hit, but as a creative talent, he says, “I am working on a million new musicals. I always have a ton of things in the cooker.” He hopes his next phenomenon will be “Love In Hate Nation,” a musical romance about two girls in juvie hall in 1962. “It has a girl group rock and roll sound to it. It is very topical about what’s going on in America today. It is looking at it through a lens of the 1960s. I am really stoked about it, and excited to get it on the stage. Time frame depends on the ‘people who own the keys to the kingdom.’ If it were up to me, I would go into rehearsal tomorrow.”

Sidebar: If you liked this story, check out:

The complete interview with Jennifer Ashley Tepper at https://unblockthemusic.blog/2018/05/03/jennifer-ashley-tepper-do-what-you-love-and-do-it-very-loudly/)

As well as the interview with Eric William Morris, who, by the way was in the Two River Theatre production of “Be More Chill”

Follow “Un-Block The Music” and share the stories. Let me know what you think about these stories, and if you have suggestions for others!

5 thoughts on “Joe Iconis, Toast Of Broadway : His Time Has Come”