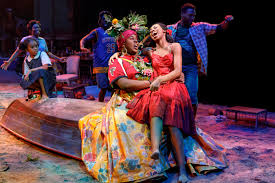 Like so many other people last night, I tuned to CBS to watch the best of Broadway receive their honors at The Tony Awards.

While “The Band’s Visit” brought home most all of the top awards, including Best Musical, much to my happiness, “Once On This Island” brought home Best Revival of A Musical. Not only did I love this show, but Producer, Ken Davenport, who accepted the award, graciously gave me an interview last week. I told him, I was going to hold the story until after the Tonys, because I knew he would win!

Davenport founded Davenport Theatrical Enterprises in 2004 to create, produce, and manage shows. Off-Broadway he produced “The Awesome 80’s Prom,” “Altar Boyz,” and “My First Time,” which he also wrote. On Broadway he produced “13,” the first Broadway revival of “Godspell,” the Tony Award-winning Best Musical” “Kinky Boots,” and Deaf West Theatre’s “Spring Awakening” among others.

Ken’s most current offering is “The Boys In The Band,” which debuted May 31.

So stay tuned…for my upcoming interview with Ken!!