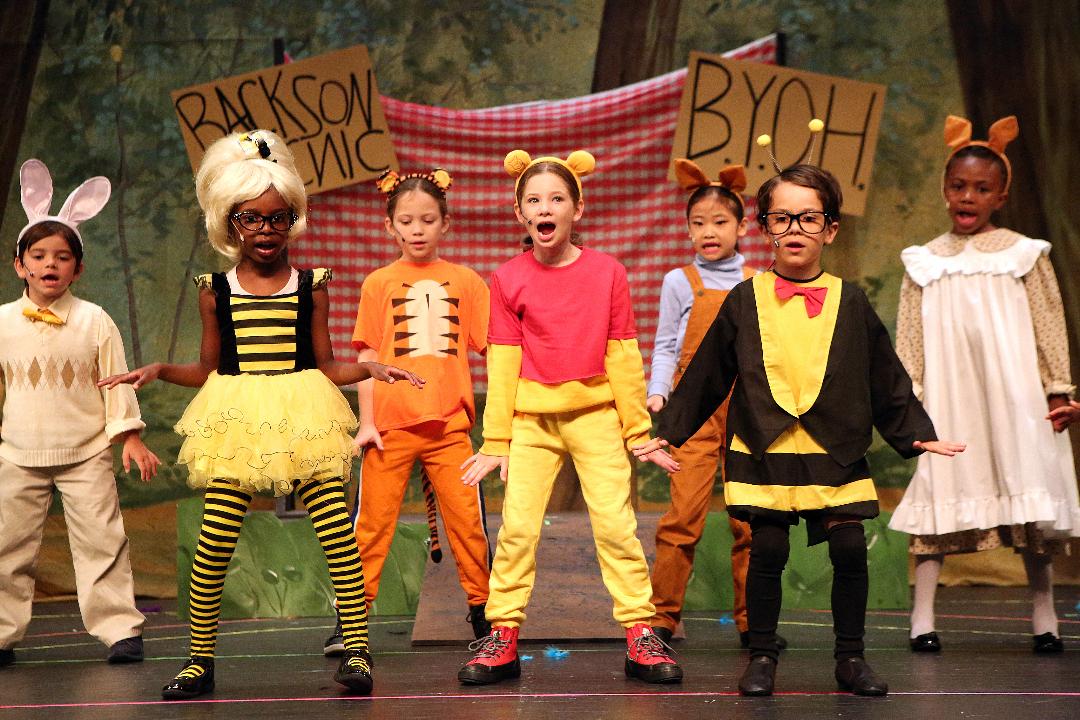 What do Next To Normal’s Jennifer Damiano and Dear Evan Hansen’s Noah Galvin have in common? Random Farms Kids Theater in Elmsford, NY. What “Un-Block The Music” loves about Random Farms Kids Theater is a theme of empowerment for all. While the group’s fabulous productions of of A Chorus Line, Les Miserables, and Urinetown are top of the line, the feeling when involved in their programs is strength and determination. Its founder, Anya Wallach, started this enormously successful group when she was 16 years old in her Chappaqua, NY, backyard! Female empowerment was not even a term then. She just made her dreams happen, and by making her own dreams come true, she brought the dreams of others to life.

If you are not in New York, and the name Random Farms Theater rings a bell, it may be because you read “Un-Block The Music’s” article about Broadway Workshop, whose founder, Marc Tumminelli, worked for Anya as Resident Director before starting his own theater company https://unblockthemusic.blog/2018/12/05/mean-girl-taylor-louderman-guest-teacher-at-broadway-workshop-where-kids-acting-goals-are-taken-seriously/.

Like Broadway Workshop, Random Farms has had many of their young actors on television, film and on Broadway. Over 100 Random Farms kids have been on Broadway, including the above-mentioned Tony-nominated Jennifer Damiano, Noah Galvin and Tessa Albertson (“Shrek The Musical” and “Younger”). However, the story of Random Farms from its beginning to where it is now is interesting beyond that.

“I wanted to be an actress and I pursued Musical Theater through college, then in my 20s, I realized that my talent was accelerating in other areas and I really loved  producing and directing,” Anya told “Un-Block The Music.”  She realized that while she loved acting, it was really a hard life, so “I decided to focus my energies into what would be more fruitful.”

Anyway, that first summer, Anya’s group did a revue of Broadway songs with a karaoke mix tape playing from a karaoke machine that she got for her birthday. “It was not very glamorous but it was fun! I didn’t think I would ever do it again. In fact, the reporter from the local newspaper came and interviewed me, and the article finished with something like, ‘Wallach enjoyed her first theatrical endeavor, but doesn’t think it is something she will pursue in the future’.”

Well, Anya likens that experience to childbirth. “I was exhausted at the end of the summer, but by the next summer I recovered and forgot how much work it was,” and she once again jumped in that summer and each one after that. Creating a show became her summer job, and from there, the business grew! “I started adding additional programs and classes, and by the time I finished college, I opened up the theater year-round in hopes that it could be my full-time job. It worked!”

Random Farms Kids Theater officially incorporated in 1997. The beauty about being so young, Anya says, was “I was willing to put in whatever it took. In the beginning I didn’t have much overhead. I was in the basement of my parents’ house!”

Much of Random Farms has developed organically, according to Anya. “We have been able to respond to a real need in the community, and to serve the kids what they want. We are focused on building up instead of building out. We now have programming for kids starting in kindergarten and going through high school into college.”

In addition to theater workshops and mainstage shows, Random Farms has four major outreach initiatives with the goal of becoming more accessible and more inclusive.

The first initiative is “Leadership.” Anya says, you don’t have to be the lead to be a leader. Her goal is to cultivate leadership skills offstage as well as onstage. “We have junior director programs and ambassador programs. Those are all free to participate in. Kids are discovering skills and passions that they didn’t know they had that were related to theater but not necessarily to performing on stage.”

The second initiative is “Service.” That has to do with going into the community and helping people. Performers can use their passion and talent to connect with other people or to learn about someone from a different background, or just make someone’s day brighter, Anya says. A piece of that is doing performances for free. “We have a troupe of performers that will perform at family centers, or domestic violence shelters and children’s hospitals and senior centers where the populations can’t leave their facilities. They wouldn’t have a way to hear or see live theater and music unless it comes to them.”

Then there is The New Kid which is Random Farms’ anti-bullying show. A few years back, this original show traveled to schools in the tri-state. It was recently updated and brought back into the programming. It went really well, and the intention is to bring it back again next year and expand it even more.

The third initiative is “Scholarship” which provides assistance to those who have financial need. “It is a game changer, and can recourse a child in life by removing financial barriers,” Anya explains.

“Young Audiences” is the fourth initiative. Its’ goal is to expose as many young people as possible to live theater arts. “This is more important than ever. We are getting kids into theater to see musicals for the first time with kids their own age, which in some ways, is more inspiring.”

Another area of inspiration is the “Stagestruck Books”. The story of Random Farms lead to the creation of these two books aimed at middle schoolers and written by Lisa Fiedler and Anya; Curtains Up and Showstopper. The idea for these books was “percolating for several years. I thought I might be able to use The Random Farms story as a platform to try to re-message the things we tell our little girls. And, wouldn’t it be nice for girls to read about another girl starting a home business?  Also, Random Farms is now focusing even more on outreach. So, I thought the books would help generate awareness for social entrepreneurship as well.”

All of this is so important. “Un-Block The Music” is hoping to write more stories in 2019 about music initiatives outside of the school setting, or even innovative public school courses. As I have said in the past, these kinds of programs are becoming increasingly more important as public education is squeezing Arts out of their budgets. Not all theater programs produce “celebrities,” but they are important in the development of a well-rounded student. So, please follow this blog and share this story on social media.

Random Farms plans to also offer more programs for teens and are also about to announce a summer mainstage show. So stay tuned!!!

One thought on “Random Farms Kids Theater Started By Anya Wallach At 16, Offers More Than Acting”