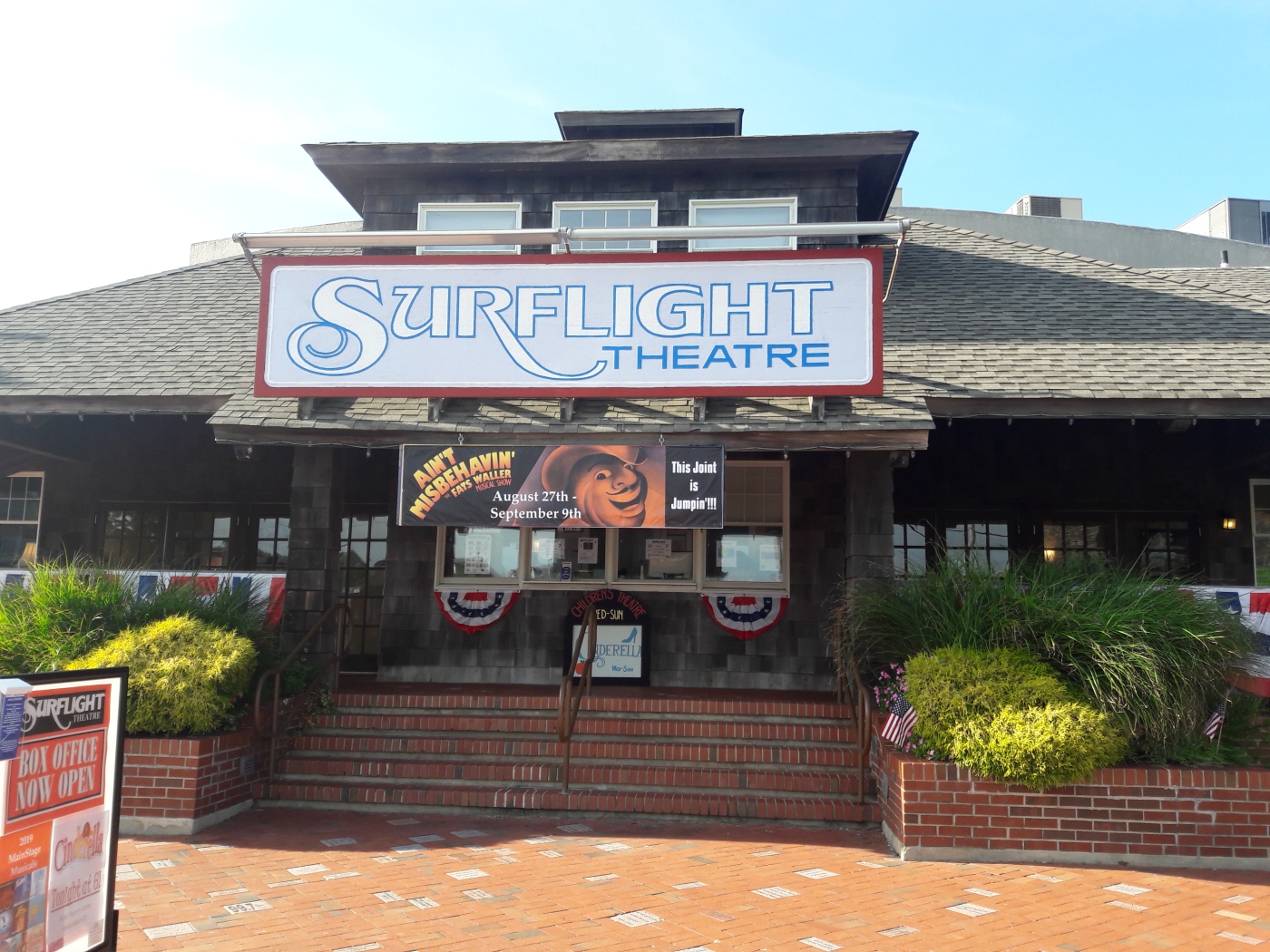 In this surreal life that, at times, feels like a level of Jumangi, “Un-Block The Music” knows that artists will lead us back to the real world, albeit an improved one. I am happy to report, that at least some live performances will be happening this summer at Surflight Theatre in Beach Haven, NJ.  Starting July 10th…there will be music!

“It will be an unusual summer, but we are forging forward,” said Steve Steiner, artistic producing director. “We moved three mainstage shows to next year, but we are still doing Cabaret and Mamma Mia in a 50 by 100 ft tent in a park across the street from the theater.” While the brick and mortar building seats 450 people, the tent’s maximum seating will be about 210. With social distancing, seating will be based on the way people buy tickets. Groups that come together will be seated together, then there will be six feet in between the next group.

The creativity behind this business plan is not surprising when you consider the theater’s history which started with Joe Hayes in 1950. Joe was a dancer in New York City.  He went down to the Jersey Shore in 1949 looking for a place to bring a bit of Broadway outside of New York, and he fell in love with Beach Haven, according to Steve. “They performed their first shows in a tent, and for several years afterwards they moved from place to place. Eventually, the company ended up in a former mechanics garage. That place seated about 312 people, but it didn’t have bathrooms,” he laughed.  People had to go down the road to the Borough Hall during intermission for that! It wasn’t until 1987, that the current space was born.

This final dwelling came about because of new fire laws. “There was a fire in a nightclub in Rhode Island. A lot of people died.  Fire marshals, particularly along the eastern seaboard, got a lot more stringent about meeting places after that. As a result, the garage was condemned for use as a public building,” Steve explained. Joe Hayes had passed away by then, but his business partner, Scott Henderson, decided to raise money and build this theater next door. The garage was used as a costume shop until 2007. At that time, “we took the garage down and built a structure on its exact footprints.” The new building has a scene and paint shop on the first floor and housing on two other floors. The complex also has The Show Place Ice Cream Parlor complete with singing waiters and waitresses. Then, there is even more housing on the side.

“We hire a resident company of actors. They rehearse the first show and start rehearsing the second show the day after the first opens. And, they rehearse usually five hours a day while performing a show at night. We do seven mainstage performances a week,” Steve explained. Living at the theater where you work actually pays off during a pandemic. “People won’t be going home, but living in a group quarantine; only around each other.”

And, what do the actors think about all this? Well, “Un-Block The Music” is lucky enough to be acquainted with Ryan Vogt who is part of this year’s summer stock company. Ryan is 19 years old, but has experience that can surpass some 30-year olds. “Un-Block The Music” saw Ryan sparkle for the first time in 2013 when he was part of Random Farms’ traveling anti-bullying musical called The New Kid (https://unblockthemusic.blog/2018/12/19/random-farms-theater-started-by-anya-wallach-at-16-offers-more-than-acting/). He performed in musical theater shows and dance competitions for several years after that, and at 16 years old he was offered a scholarship to Joffrey Ballet School where he studied and performed for 2 years while being home schooled to complete his high school education. When he chose a college, he chose Boston Conservatory. “I wanted to reconnect with musical theater roots, but not lose my dancing edge.” That turned out to be a great choice. “I am a better overall performer!,” Ryan said. He wanted to continue training hard when he went to college. “I didn’t want to choose a place that just said, you are a phenomenal dancer. I wanted to learn more.” Aside from honing skills he already had, “my voice teacher, told me to learn a song on piano. ‘You will be asked to do it on auditions,’ she said.”

The big draw for Ryan to do summer stock is the pace of it. “I am somebody who needs to be always working.” Ryan was cast in the Conservatory’s mainstage, Shrek,  during his first semester. (mostly unheard of as a freshman.) However, the pandemic shutdown anything that could have happened in the spring. “Un-Block The Music” spoke to Ryan right before his first rehearsal for Cabaret at Surflight . He said, “I want to throw myself back into theater! I can’t wait to live in this professional atmosphere and to be to be relied on to perform. I know this will be much different than shows I have done before.”

Mainstage shows are not all this theater has to offer. Comedy shows and concerts fill in the days when there are no musical performances. Surflight creates Children’s Theater as well. This summer six shows will be performed. First up is Frozen Jr. Ryan is Olaf! Those shows run Wednesday through Sunday at 6 p.m. The mainstage shows start at 8 p.m. with some matinee performances. Whew!

Not surprisingly, with this type of experience, performers go on to bigger things. Some well-known Surflight alumni include: Richard Kind (Little Did I Know https://unblockthemusic.blog/2020/05/06/women-wednesdays-lyricist-marcy-heisler-talks-podcast-little-did-i-know-how-a-disappointment-lead-her-to-success/), Seth Rudetsky( musician, actor, writer, and radio host), Musical Director Andy Einhorn, and Charlotte d’Amboise (Pippin, A Chorus Line.”Un-Block The Music” just saw her in Chicago https://unblockthemusic.blog/2019/12/12/start-2020-with-un-block-the-musics-interview-with-chicagos-musical-director-rob-bowman/#more-896)

“Un-Block The Music” will see at least one of Surflight’s shows this summer, so stay tuned for more info. But, as an avid supporter of the arts, let me leave you with this lyric from  Mamma Mia that most certainly professes my feelings about theater. “My my, how can I resist you?..Yes, I’ve been brokenhearted. Blue since the day we parted….Mamma mia, now I really know. My my, I could never let you go.”