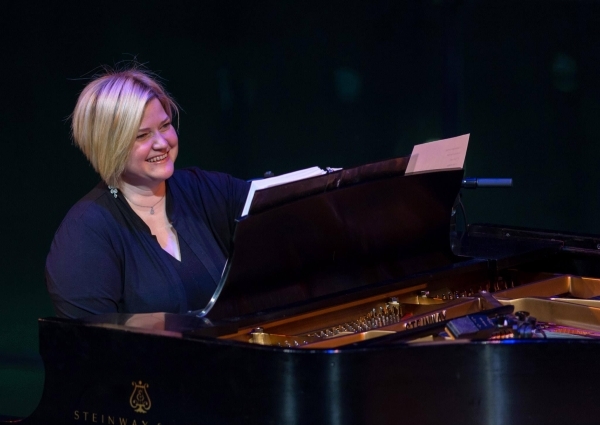 In a time when many us feel the world has totally lost its empathy, it was so wonderful for “Un-Block the Music” to meet Mary Mitchell-Campbell, conductor, music director, orchestrator, composer, arranger and humanitarian. While serving as musical director for many New York musicals and tours, currently on Broadway’s Mean Girls, she is also founder and co-executive director of Artists Striving To End Poverty, a nonprofit organization that teaches children in extreme situations how to use the arts as a tool for life skills, healing, and connection https://astep.org.

While ASTEP has never been an organization concentrated on fighting hunger, this pandemic has temporarily changed ASTEPs focus to make sure people are fed. “Our kids, already in difficult situations are now in more trouble,” Mary-Mitchell says.  ASTEP has started a food distribution program, Filling the Food Gap, in partnership with the Red Hook Container Terminal and the NYCEDC. This program provides direct service and food distribution to Abraham House located in the South Bronx.

When the shutdown began, she and Raul Esparza (Company, Speed-The Plow), put together Take Me to the World: A Sondheim 90th Birthday Celebration, a virtual gala that raised over $260,000 for ASTEP in 24 hours, according to Broadway.com. As the concert’s musical director, Mary-Mitchell was in charge of creating new arrangements and working with the artist’s so their performances were perfect as if they were performing live in front of an audience. The list of artists was a long one, but here’s a sample: Annaleigh Ashford, Christine Baranski, Laura Benanti, Sutton Foster, Josh Groban, Neil Patrick Harris, Patti Lupone, Lin-Manuel Miranda, Ben Platt, Meryl Streep….If you haven’t seen it…go watch it now…and donate! https://www.broadway.com/sondheim90

While many successful artists are humanitarians, Mary-Mitchell’s calling started even earlier when she was in college. She was always interested in people and their storytelling. Witness that in the fact that she studied psychology and sociology in high school and double majored in religion and piano at Furman University. But it was actor Paul Newman, who was the bridge connecting her music career and charity work.

“I had two amazing mentors,” she says. After moving to New York, Mary-Mitchell played piano for a Broadway Cares benefit and, it was there she met Broadway musical director Jack Lee. He got her a job on a revival of Sweet Charity at Lincoln Center where she worked with composer Cy Coleman. “He took me under his wing and really invested a lot in me. He was very interested in mentoring and working with woman and had a lot of women collaborators. It was Cy who introduced me to Paul Newman. I became involved in all of his humanitarian work.  I worked all of his big fund raisers all over the country for kids.  I admired and followed his example of leveraging his acting career for the greater good. It was inspiring.”

When someone’s path to success is written on paper (or computer), it sounds a lot easier than it actually was. Mary-Mitchell was born in Eastern North Carolina to a non-musical family. “As a voracious reader, I would check out many books from the library every week. I was a nerdy bizarre child,” she jokes. “I always wanted to play piano, and asked for one for Christmas when I was 3 years old! But, I actually started playing piano when I was just 6, at church mostly.”

Mary-Mtichell learned to play piano by ear listening to the radio. “When I was 16 years old, I went to North Carolina School of the Arts which was a high school/college. While I played classical piano very intensely, I also discovered musical theater. I decided I didn’t like the isolation of classical piano. I wanted to do something more ‘team sport oriented!’”

While that was Mary- Mitchell’s early chapter, everything really came together for her in New York. After Cy Coleman, her next big mentor was Stephen Sondheim. She met Director John Doyle and worked with him on Sondheim’s Company. She ended up doing three shows with that team, including Road Show.

In between all of her other work, “Un-Block The Music” wants to give a nod to her work as a teacher as well. Mary-Mitchell, after all, was one of the youngest people ever to teach at The Juilliard School in New York.

Despite all of her successes, Mary-Mitchell says all women face sexism, but there has also been times she was hired because she is a woman. “It’s harder to break in…harder to get through the door, and that is why Georgia (Stitt, her best friend) and I work so hard to pay it forward.” Admittedly, there is not one week that goes by that a person isn’t surprised by the job she does on Broadway. Overall, however, she says she was lucky to be in the right place to meet the mentors she did. After her work with Sondheim, she went on to work on such shows as Next to Normal, Addams Family, Tuck Everlasting, Kristen Chenoweth’s recent For The Girls. When the shutdown happened, she was working at Mean Girls on Broadway and helping get its tour and the tour for Prom ready to go. For now, she continues to work on virtual events, and learn a lot about production from home!