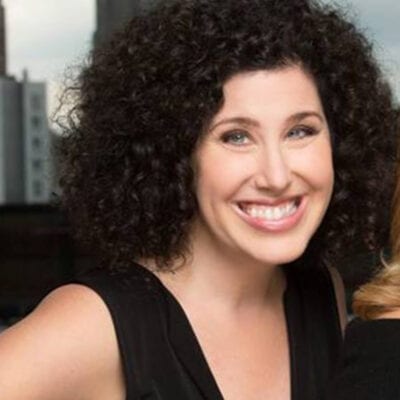 Sometimes the chips just fall in place. This week, I didn’t have to look far for a subject for Women Wednesday. It’s writer/lyricist Marcy Heisler. As quarantine drags on, “Un-Block The Music,” is immersing itself in music and most especially musical theater any way I can get it. Lucky for me, an industry friend connected me to Little Did I Know,’ composed by Doug Besterman with lyrics by Dean Pitchford and Marcy Heisler. This is a weekly musical podcast released by The Audio Drama Initiative. While those creative artists did not expect to be quarantined when they were recording the podcast in October, they certainly are timely in their release!

Anyway, I had an immediate connection to Marcy, not only for her work on Little Did You Know, but also as the book writer and lyricist for Dear Edwina. While the show has been off-Broadway more than once, I discovered it as one of the most beloved shows performed in children’s theater. Marcy became even more endeared to me when she said her favorite theater performer of all time is Freddie Mercury! She really hit on the premise of my blog, crossover between genres (rock and theater) and my message of “un-blocking all music.” More on that later. Let’s start with Marcy’s story, how she ended up in New York, her golden partnership with Zina Goldrich and her involvement with Little Did I Know.

Originally born in Deerfield, Illinois (outside of Chicago), Marcy’s parents were active in community theater and started a theater there. “I thought, this is for me!” said Marcy. “So, my mom put me in drama class and I began performing in the Chicago area in the mid-1970s. I was in the traveling troupe of Free To Be You and Me. I always thought I would be a performer!” After moving to St. Louis for a while, Marcy went back to Illinois to attend Northwestern University. It was there, Marcy truly found her voice.

Northwestern University produces The Waa-Mu show. It is an original musical theater work that is student written, orchestrated, produced, and performed every year. Freshmen don’t usually get chosen for the show, but Marcy made it to callbacks. She was thrilled, but so disappointed when she got cut for another girl who was a dancer. “I thought, ‘what can I do to get into the show next year?’” She went back to her dorm room and decided to write a song about “character” women, and she came up with a funny song called “Let’s Kill the Ingenue”. (A character actor, by the way, is a supporting actor who is often unusual, interesting, or eccentric. They often steal the show, so to speak, from the lead actor.)

Not only did Marcy get into the Waa-Mu show the following year, but she took three other character women with her. “Not only did we perform the number, but I actually wrote a good deal of the rest of the show. When I wrote lyrics that came from a painful experience, I saw the good that it did and how much life writing could have for me. My direction turned from performing to lyric writing. If I wrote for myself, I could also be a performer, but I found I loved writing for others more than I loved writing for me.”

Marcy thought about going to New York in junior year of college, but was unsure.  New York University (NYU) had just started its dramatic writing program. She thought, if she was destined to take this other road, fates would take over and she would get into the program. Well, she got in and spent her Junior and Senior years at NYU.

A chance meeting in the early 1990s also put Marcy’s career in a new space. She met  composer Zina Goldrich at a BMI music publishing event. “Zina actually was there to see friends. She came into the room and sat next to me.” They immediately hit it off It took a year before they actually wrote anything together, and then they thought, “why don’t we write something in the vein of Schoolhouse Rock?” They came up with Dear Edwina. Marcy wrote the book and lyrics. Zina composed the music. The show premiered Off-Broadway in July 2004 and it receive a Lucille Lortel Award nomination for Outstanding Musical. It was revived again in 2008 and 2009. One of the stand-out songs for the show is, of course, “Sing Your Own Song.” Marcy said, “It’s my anthem!”

“The moral of the story is that I love writing, however writing is the trunk of my tree. I still have other branches. Zina and I do concerts in New York at 54 Below all of the time. We also do shows in LA and travel around the country. Our shows consist of stories about our lives and funny romantic comedy songs.”  Marcy and Zina have also just signed a publishing deal with Concord Records, so they will be applying their skills to pop music as well.

Marcy also offers her own lyric writing class online https://www.marcyheislerlyricworkshops.com/. “There are some good writing programs, but people aren’t always teaching what the challenges are in a professional setting. The exercises often touch upon surprises, joys and creative challenges I have experienced in my own 30+ years of professional lyric writing. I want to help writers deal with the pressure but still have fun!” She started a class for teens as well. “A lot of kids don’t interact as much with professionals. I was lucky to have that experience. I have found that when you treat kids as colleagues, it makes them realize there are many career choices ahead of them.”

This brings us to Little Did I Know. The podcast musical was released by The Audio Drama Initiative. It features a book by Lou Aronica and Johanna Besterman  based on the novel by Mitchell Maxwell and newly released on Apple Podcast. Little Did I Know has music by Tony winner Doug Besterman (Thoroughly Modern Millie) with lyrics by Dean Pitchford and Marcy! Marcy has also worked with Doug on Ever After, her musical adaptation of the film that has seen stagings already, but which she hopes will come to New York as well.  “Doug was my orchestrator,” she said.

Marcy joined the Little Did I Know team already in progress! They needed another lyricist and thought she could bring a fresh perspective. The musical tells the story of a group of recent college graduate friends who bring a broken-down summer theater back to life in 1976. “It was interesting to do 70s style material with the younger generation. The 1970s had a very specific rhythm, a different flow of the water than today’s music. These young actors are wildly talented!”

There are nine episodes and 22 original songs! “The show is thought provoking, but also makes you smile, and it carries you back to a summer feeling,” Marcy said.  The cast includes Richard Kind (“Un-Block The Music” adores him!), Patrick Page, Lesli Margherita (who was recently in Emojiiland), Laura Murano (who you might recognized from Disney Channel’s Austin & Ally) and YouTube star Kurt Hugo Schneider.

Podcasts of Little Did I Know have been released on Tuesdays. This will continue through May 12. However, all episodes are available at : https://www.audiodramainitiative.com/little-did-i-know

Marcy remains in New York through this quarantine. “As writers we have to take this time to brainstorm and try to use the time productively.” “Un-Block The Music” can’t wait to see what comes next. Maybe Williamsburg, a show created with Jason Katims (My So Called Life, Rise)  and Tom Kitt (Next To Normal, Jagged Little Pill)? Working with Zina on orchestral versions of their songs? Hmmm….I guess we will have to wait and see.

2 thoughts on “Women Wednesdays: Lyricist Marcy Heisler Talks Podcast “Little Did I Know” & How A Disappointment Lead Her To Success”