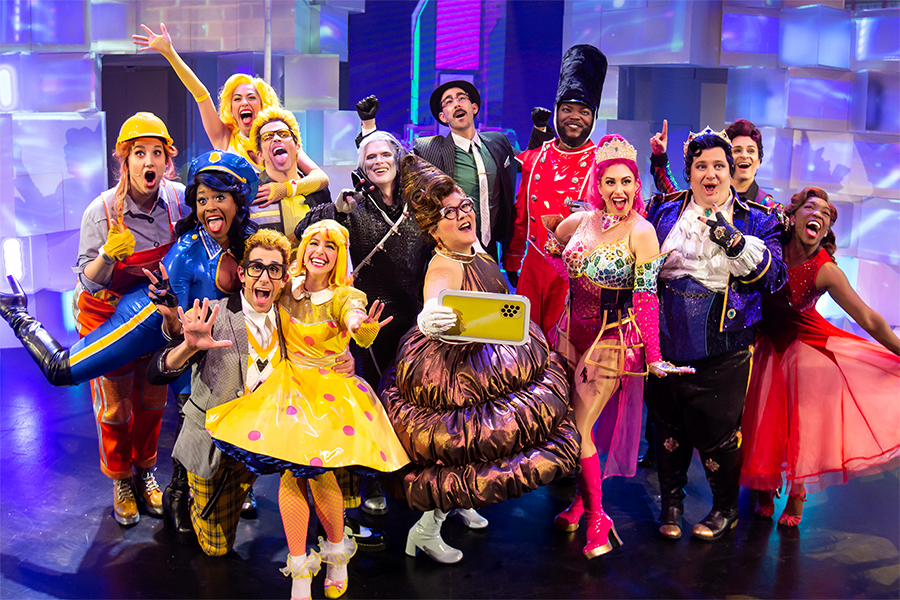 Transport yourself to the inside of that smartphone you are always staring at! Think what if might be like to be an emoji inside that phone. It’s an imaginary land of its own., and that’s the heart of Emojiland, The Musical.  This remarkable theater experience will end its limited off-Broadway run on March 19 at the Duke on 42nd St., NYC.  If you are someone who is sick of all the rebooted shows, here is something original.  A lot of that originality comes from the work of its musical director Lena Gabrielle.  “Un-Block The Music” hung out with Lena in Starbucks before I saw the show, and her creativity and enthusiasm put me in the right mindset for this entertaining show.

Before I get into the interview with Lena,” Un-Block The Music” wants to set the record straight. Emojiland is not a kid’s show. The setting is inside a smartphone in a digital world. However, while 10-year olds enjoy the show on one level, teenagers on another, there is a lot for those of us over 21 as well. While I don’t usually write reviews, because I think every show has value, you may want to google what the New York Times had to say about it.

Emojiland, The Musical’s book, music and lyrics were written by Keith Harrison and Laura Schein; all of it bodacious and memorable. Lena, of course agrees and she has a theory as to why this experience has been such an amazing one. “(Even as the musical director), I look at shows from a composer perspective because composing is where I started my career. Keith and I work very differently and have very different brains. He is a very logical composer and I am a very emotional composer. I admire when someone thinks differently than me so we can challenge each other. We go back and forth. It’s not a matter of what’s right or wrong, just a different perspective. We all want the same end result.”

Who is Lena and how did she get here? “Un-Block The Music” is always interested in career paths. Lena is not only a composer and a musical director; she is an arranger and orchestrator. She does a lot of workshops “because I like to get in on the ground level.” As is the case with a lot of people I interview, the career sort of picks them. “I started out as a performer, actually a classical violinist. I sing and play piano; all self-taught, “she says.  Lena went to Ithaca College, and began nurturing her love for Harry Potter. She wrote music and played all over the country under the band name The Butterbeer Experience. That made her realize she could write musicals.

After living in New York for a while after graduating, Lena was drawn to a Pittsburgh Theater school when she and a friend were asked to write a musical for the students to perform. However, her first assignment at the school was to act in the musical Children of Eden. When she showed up on the first day of rehearsal, the director said, ‘I heard you play piano, our musical director just quit’ and he handed me the score. I was familiar with it, but at that time my sight reading was not that good. However, after playing a lot of rehearsals, I thought maybe I can do musical directing on the side!”

Lena had been in Pittsburgh for a year and a half when her show Tink! was chosen as part of the New York Musical Festival (In fact, Tink! received an award for excellence in family theater). Lena wrote the music, and the lyrics were written by she and Greg Kerestan. “It was the Fall of 2015, and I knew Tink! was going to end up in New York, and at the same time, Debra Barsha  (Associated Conductor Jersey Boys & Donna Summer Musical) found me in Pittsburgh and brought me to New York for one project.” That lead to a second project and Lena moving to New York. “It wasn’t until about 2 years ago, I realized I am a music director and arranger for new musicals! I always tell kids to take their opportunities. There are a lot of jobs you don’t know exist.”

While “Un-Block The Music” has been interviewing a lot of musical directors of late, the job descriptions of those I interview varies. So, I asked Lena to explain the role of musical director. “A Musical Director is the person always there in the room. They teach the music to the cast. Then rehearse with the band and conduct the band. However, for a new musical, especially here in New York, the term takes on a lot of different meanings. The Musical Director can be responsible for helping with arrangements (the arranger generally helps shape the voice of the musical).  Sometimes the Music Director becomes the music supervisor who oversees everything.”  The Emojiiland experience is a little different for Lena.  She became a part of the show because of her past work with the general manger Visceral Entertainment. This is their first major show. As for Lena, this is the first show in a while where musical director is her sole title.

“The music in Emojiland is the bomb!” Lena says.  “My band members are the hardest working people on the planet!” There is a large programming and synthesizing element to the show. While there are only five musicians in the pit band, because of the electronic elements, it sounds like at eight!  “In my book, the hardest part (of performing the music in the show) is not the synthesizers, the hardest part is that over the course of the show I play 5-7 pianos and they all have a different sound and touch. I have to play each of them in a different way.”

Another challenge in performing the show is the learning curve necessary to work with time code.  Lena explains. “I have a green button, and when I press it the lights, sound and projections are controlled.  With the song, ‘The Progress Bar,’ for example, (where the phone is being visually updated on the stage), the audience sees the percentage bar going up from 10 to 100.  The music needs to be synched exactly with the visuals.  While I didn’t build the computer program, I learned how to use it and do maintenance on it.”

While Lena concedes she is a workaholic, she is looking forward to a little time to do some writing when the show closes. Hopefully, “Un-Block the Music’s” readers will have time to catch this show, but if not, an original cast recording of Emojiland: The Musical is available digitally and will be available physically beginning March 13. It’s worth a listen if only for Lucas Steele’s performance of “Thank Me Now”.

For more about Lena, go to https://www.lenagabriellemusic.com/

For more information and ticket info, go to: https://tickets.dukeon42.org/single/PSDetail.aspx?psn=10517

2 thoughts on “Sick Of Reboots….Transport Yourself To “Emojiland” With Musical Director Lena Gabrielle”