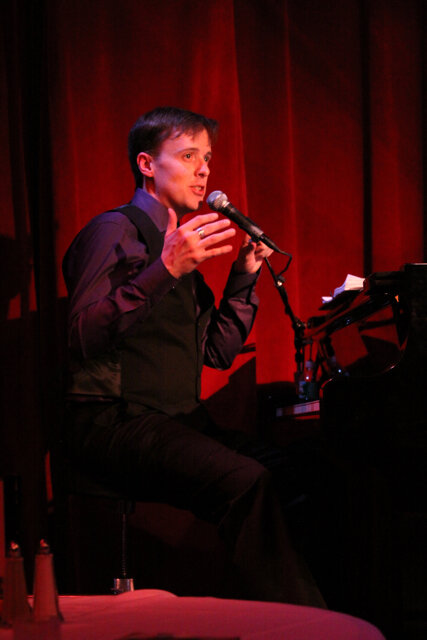 If “Un-Block The Music” has learned anything from writing this blog, it is that schools need to educate their students about the many jobs there are in theater, especially in music and sound. It’s not just about being an actor or singer. Writer, Composer, Lyricist, Music Director Michael Patrick Walker can be the poster child for that statement. He has been honored with an Outer Critics’ Circle Award and multiple Drama Desk nominations for his theatrical writing, and his songs have been performed and recorded by artists like Chita Rivera, Kelli O’Hara, Andy Karl and Telly Leung. One of his latest projects is working on Andrew Lloyd Webber’s Unmasked.

“I grew up in a small town in central Pennsylvania,” said Michael. Even though it was probably only a three-hour train ride into New York, it may have well been rural Oklahoma! Plenty of cities were around us, but we really didn’t go to the cities unless there was a specific reason.” That is certainly a story “Un-Block The Music” has heard quite often. However, Michael had a penchant for music early on. “People in my family always played instruments. My grandmother had an electric organ in her front room, and as the story goes, I went to my parents at four years old and told them I wanted piano lessons. But, at four, I could have just as easily said I wanted to be a veterinarian! For whatever reason, however, they indulged me.” There was a local man who taught piano and despite the fact that Michael’s hands were small and his feet did not reach the pedals, the man agreed to give him lessons.

At first, Michael’s parents just leased a piano from the local music store, but Michael stuck with the lessons, so they ended up buying it. “To my knowledge that piano is still in the basement!” As with most musicians, Michael’s early training was classical. Here’s where school programs need to step it up!!! “It wasn’t until junior high that I discovered other ways to use music; to tell a story with music and create characters on a stage. That knowledge happened quite accidentally. My high school hadn’t done musicals for a while, but they wanted to get back into it,” said Michael. The intent was to do The Sound Of Music, but they  didn’t feel they were ready for a pit orchestra. There was a two-piano version of the show available that could be used to produce the show in a smaller auditorium. The musical director knew Michael had the piano skills, so he asked him to play the second piano. “That was my first experience with theater. It nudged me towards the musical director role. I probably would have discovered it eventually, but it was an interesting way for that to happen.”

Michael added. “I continued doing the shows in school. I did a little acting too. Most of the people encountered at one point in time have done acting (because it’s one of the most visible ways to get into theater). I enjoyed doing it, but it was never anything I really wanted to do for a career.” As Michael’s path illustrates, being exposed to theater in any way you can is valuable so that you learn everyone’s job and what part those jobs play in a show.

When it was time for college, Michael attended Carnegie Mellon. “I loved my time there, but I did a lot of cross pollinating amongst the majors. I have my degree, but what is reflected in it is not my true training!” There is a theater group at Carnegie Mellon called Scotch’N’Soda. Their main thrust has been to perform as much original work as they could. Students write books and music. “I wrote music and lyrics for two or three shows while I was there. It was probably the first time I did this seriously.” The experience is unique because you can’t go through the same steps when you do a show professionally.  It can take as much as 10 years to get a show to the stage, but it’s invaluable to see something you created on the stage, he explained.

The kind of confidence and guts young people have is more than advantageous in theater. Like so many artists, after graduating Michael went to NYC with one month of rent in his pocket. He sent resumes to all of the music people on Broadway. He says that doesn’t usually work, but it did for him! “I was in the City for 10 months when I got work as a musician. There was going to be an audition for Phantom Of The Opera in the middle of August which meant none of the usual pianists were around to play the auditions. Somehow Phantom’s Musical Director Kristen Blodgette found his resume and called him in to play.

The audition was for the diva Carlotta. “I had singers coming in and putting opera repertoire in front of me. I had classical training not opera training. It was fine, I could play it, but there were bumps. Kristen thought I played quite well. Months later there was a national tour for CATs, and Kristen remembered me. She knew I played well and had a copy of my resume. That became my first official chair.” Michael was trained at the New York Broadway production. “Whenever I talk to students about my story, I always preface the story with… ‘I had dumb luck,’” Michael said. “Un-Block The Music” says “dumb luck with a lot of talent!”

Anyway, Michael went on to co- write music and lyrics for Altar Boyz (along with Gary Adler), one of the most successful Off-Broadway shows ever. It won the 2005 Outer Critics Circle Award for Best Off-Broadway musical.

After that, Michael took a job at Disney Channel’s Johnny and the Sprites. He was the music director and supervisor and wrote several songs for each episode. Television, he said, is different than theater, more collaborative. “As a writer you have to be willing to hear thoughts and make changes.” You have more control in the theater world. “In the TV world, you are a work for hire. TV is quick. There is no ‘we will do it next season.’ That quick turnaround can be very satisfying,” he said.  (Stacey Weingarten worked on that show as well: https://unblockthemusic.blog/2022/01/17/women-wonders-run-to-see-stacey-weingartens-rescue-rue-combining-music-puppetry-for-a-loving-purpose/)

That does not mean Michael has abandoned the theater world. On the contrary his musician credits include Frozen, Aladdin, Sunset Boulevard , Avenue Q, If/Then, Wicked, and more!!!!

Michael never abandoned his own creations either. In 2014, his original music and lyrics were part of the premiere of  Dog and Pony at Old Globe Theatre in San Diego, starring a familiar name for “Un-Block The Music fans,” Eric William Morris. (https://unblockthemusic.blog/2018/05/25/eric-william-morris-on-broadways-cutting-edge-ready-for-king-kong/)

Michael has written and continues to develop his own shows such as being theo and Cupid’s Error. “being theo was my first original story. I went as far as I could on my own.” Now he is collaborating. Same is true for his other show in development, Cupid’s Error. “The pandemic changed all time frames. Both shows have been delayed.” He knows, however, he is not alone and is very quick to say, “I was fortunate to work for most of the last couple of years.”

In early 2020, (before CO-VID!!!), Michael finished the world premiere run of UnMasked: The Music of Andrew Lloyd Webber at the Papermill Playhouse, where he served as the music director and conductor. When “Un-Block The Music” spoke with Michael earlier in 2022, he had just returned from Tokyo, Japan, where he was musical supervisor for a new and what he called improved version of this show!

When asked what his goals are for the future, Michael said,….”My goal always is to tell stories whether that is as a writer, music director or when I am  auditioning actors. It all boils down to that. While there are a lot of people who feel this way, others lose site and look at theater only as a business. We all want to make money, but it has to start and end with the best way to tell a story!”