Going to clubs in the 1980s, I would hear “One Night In Bangkok” by Murray Head and I absolutely loved the “weirdness” of it. Who knew that it came from the musical Chess? Well, I guess I had “a thing” for Murray Head because I became obsessed with an album in my mom’s theatre collection with Murray singing “Superstar” and Yvonne Elliman singing one of my all-time favorite songs from the same show “I Don’t Know How To Love Him”. Love!!!! What does that have to do with the fact that “Un-Block The Music” saw Pretty Woman on Broadway?  Well….when leaving the Nederlander Theatre that night, people, were singing the songs! Broadway songs used to be on the radio and loved by the mass population. Somehow that changed. Now, musicals like Pretty Woman with songs like “I Can’t Go Back” written by Bryan Adams and Jim Vallance can “Un-Block” musical theatre for the general population again! Musical directors like Will Van Dyke are helping to make that happen.

Producers seem to want pop writers like Bryan Adams and Sara Bareilles (who wrote the music for Waitress) to write for theatre, instead of finding a great pop writer who writes for theatre already. Will says, although that’s true, “it is really cool that producers are getting people who write for theatre to work with songwriters like Bryan and Sara to guide them through the experience. That’s invaluable for both parties. I learned so much from Bryan and Jim, and I truly believe they would say the same thing about working with me.”

As a huge Bryan Adams fan since about 1981 when he released You Want It, You Got It, I was excited about his involvement with Pretty Woman. However, I still couldn’t help but ask why Bryan Adams the king of big rock anthems like “The Summer Of 69” and “Cuts Like A Knife.”?  Will said, Bryan and Jim wanted to write a musical. They were in town, and called Jerry Mitchell (director and choreographer of the show) in hopes of getting a meeting. They did. They already had three songs written! While they had no musical theatre experience, Jerry knew that their music was and is iconic for the time period and he had to hire them.

Getting Pretty Woman to the stage was unconventional from the start. The film was written by J.F. Lawton and directed by the late great Garry Marshall who always thought the movie could easily be turned into a musical. Jerry Mitchell who was a dancer when the movie came out 1991 knew it was a musical too. Will tells the story. “After seeing the movie in 1991, Jerry went to his agent and said, ‘I want to get the rights to Pretty Woman so I can turn it into a musical.’ That, of course, wasn’t a possibility as he was still in the early part of his career.”

Will continued. “Slowly over time, Jerry got bigger and bigger and started doing music videos and started doing Broadway shows and became ‘Jerry Mitchell’. And, he still wanted to turn Pretty Woman into a musical. Garry Marshall had already turned the story into a jukebox musical, and they had done a reading at his theatre in L.A. Jerry saw it and told Garry (who co-wrote the musical’s book with J.F. Lawton) ‘You have to get an original score!”  Garry agreed.

Again, the question, why Bryan Adams and Jim Vallance? “What is great about Bryan and Jim is they can write a hit song in a day.” Will explains the typical process. We would say, “Here is where Vivian needs to sing an ‘I Want’ song. They wrote three or four songs for that spot, and each one progressively got better and better, until they created ‘Anywhere But Here’. I could sing you the other three songs too because they were great songs, but they didn’t tell the story we needed to tell. We would say, ‘maybe you can just refine the lyric’ and they would say, ‘no, we’ll just write another song.’ That was the most amazing part of working with them. They are just so game to just write another song!”

Un-Block The Music has been attending a lot of shows lately, but something felt different about this music. I asked Will if I was hearing what he wanted me to hear. “When I was approaching the arranging of the show, I thought a lot about what I hear on the radio. If you step away from the drums and bass on a lot of things you hear on the radio right now, the songs sound like a cappella group vocal arrangements. So, having those layers of ‘ahhhs’ and ‘oooos’ underneath a song is almost like a fabric of the orchestration. I wanted it to feel more contemporary.” It did! When the fabulously talented Samantha Barks belted out “I Can’t Go Back,” I could easily hear it blasting on the radio. 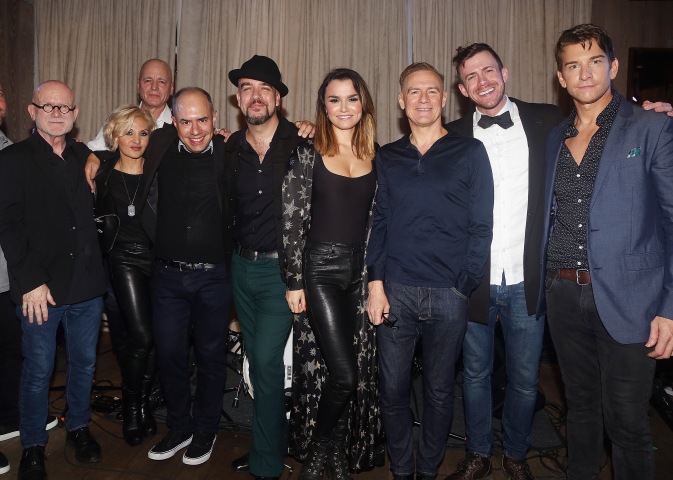 If Will’s comments intrigue you, they should, Will is not a theatre novice in any sense of the word. “When I was in college, I started writing. I knew I liked writing story-driven songs, but I also love pop and rock music and I was trying to fuse them together!!!” It was at New York University that Will met Andrew Lippa (The Wild Party, The Addams Family, Big Fish), who truly opened his eyes to a career he didn’t even know existed. Not only is Andrew a composer he is a musical director. “He showed me you can be a writer, an arranger, an orchestrator and a musical director and all of those things together.” Andrew introduced Will to Stephen Oremus (Frozen, Kinky Boots, Book Of Mormon). Will worked alongside Steven on Kinky Boots, a show with songs by another 1980s icon, Cyndi Lauper.

In addition to his other theatre credits such as Rent, The Addams Family, Grease and Wicked, Will continues to compose his own music, writing The Gravedigger’s Lullaby, Straight, Writing Kevin Taylor, Winnie The Pooh, KIDS & The Lion King Experience. Check out Will’s website http://www.willvandyke.com.  And, stay tuned for his upcoming PBS special. Details to be announced.

Will and I talked a lot about why musical theatre songs have not been in the popular realm in the last 20 or 30 years. He said, “In the 1990s, musical theatre changed with sweeping musicals from composers like Andrew Lloyd Webber. They were just so epic, people forgot that pop music and theatre go together.” Maybe, it is all coming full circle. For those who don’t know it, pop diva Ariana Grande’s new song “7 Rings” incorporates the melody of “My Favorite Things” from The Sound Of Music. And, just in case you didn’t know, Ariana starred as Charlotte in the Broadway musical 13…Un-Block The Music!!!!