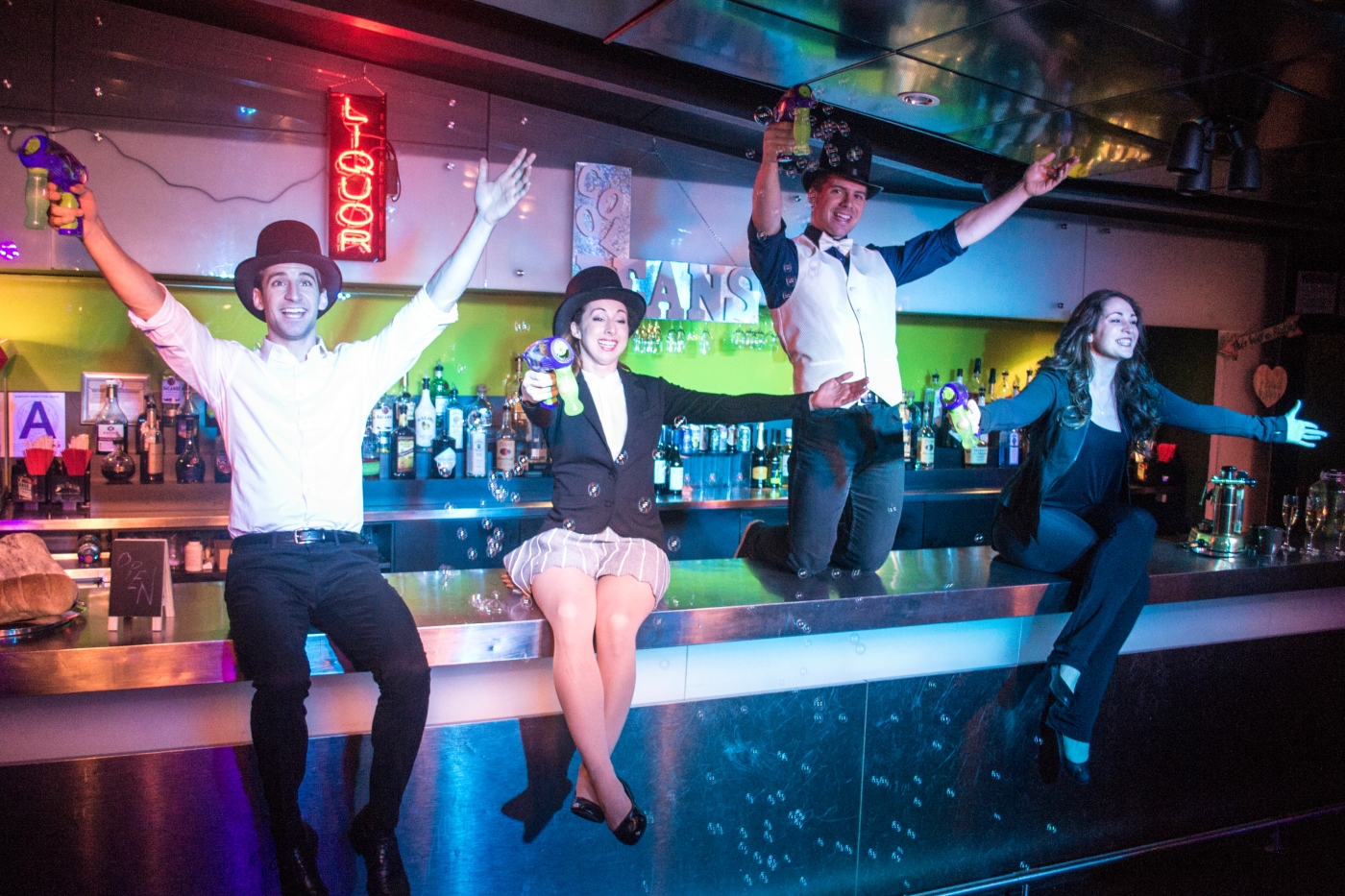 Do you feel like work is the main priority in your life? Do you continually cancel plans with your friends? Why should something fun, like meeting your friends, for brunch seem like just an added calendar commitment?  “Un-Block The Music,” pondered these questions, examined my own life and scenarios, all while having an Irish Coffee at New World Stages, NYC, watching The Imbible Presents Day Drinking: The Brunch Musical.

Day Drinking is another show presented by Anthony Caporale and Nicole DiMattei the team behind The Imbible Presents A Spirited History of Drinking  which I wrote about last summer. In addition to Anthony and Nicole, the team includes Josh Ehrlich who did the musical arrangements for History, but composed and arranged the original a cappella score for Day Drinking. Josh and I met recently at a lounge in New York City, and we ironically talked over Coca Cola. I told Josh that, in my opinion, one of the show’s greatest assets, is that it is unique. I can’t remember ever seeing anything like it.

What I love about writing this blog, is often getting the chance to speak with a show’s creators front and center or behind the scenes. How the show comes together is another show within the show! Case in point. A cappella music has always been a staple, with barber shop quartets and school groups, but since the Pitch Perfect movies and the enormous popularity of Pentatonix, music fans have become more avid listeners. Josh says he doesn’t necessarily like creating a cappella music that imitates pop. “Beat boxing can be great,” he says, “but it can also be a crutch. With it, you may not be writing pneumatically for the voice.”

Josh’s background in a cappella goes back to high school and then as a student at Yale, he was part of an a cappella group. Right afterwards, Josh joined Voices of Gotham, an a cappella, barbershop chorus. It consists of 40 men. Huh? Josh joked, “a friend of mine joked that being part of a cappella group is like a gateway drug to a career in the arts.” What a true statement. It was during his time with Voices of Gotham that Josh met Anthony.  “He knew that I arranged music, and I knew he was involved in a niche that included food and beverage.”

As an employee of Drambuie at the time, Anthony was going to be presenting at the Mother’s Day Manhattan Cocktail Classic. The event was what you would expect in terms of presentations and PowerPoints. “Anthony was eager to do something out of the box. He said, forget traditional, let’s write a musical.”

With Josh’s background, this type of musical seemed fitting. “My college a cappella group was called Society of Orpheus and Bacchus (the gods of music and wine). As part of this group, I had traveled to Saint Emilion in France.” Josh said, at one point, they found themselves in this medieval city and upon finding a cave they sang a few songs including an arrangement Josh did of Hallelujah. “I remembered feeling very complete after that; the satisfaction of hearing my group sing this. I knew I wanted to do more.” Anthony’s script presented that opportunity to do more.

So, with Anthony’s script in hand, the team got together mixed up musical styles within a cappella arrangements created by Josh. There were Barber shop songs, Gregorian Chants, Pop songs, and people liked it! After the conference, they worked on the show and with some rewriting and rearranging, it went to New York’s Fringe Festival and it eventually moved to off-Broadway. (Fringe theatre is theater that is experimental in style or subject matter. Fringe gives a spotlight to theater, dance, puppetry, music, visual arts, and spoken word. https://fringenyc.org/about_fringenyc/)

After the show continued being performed Off-Broadway at New World Stages for a while, the team was given an opportunity to create a matinee show. “I loved everything I had done up to now, but I was hoping to do some more original music. Now, was the time. We talked about ideas like incorporating folk music from different parts of the world. ‘What about original music?’ I said. Vocal music feels at home for me.”

Everyone agreed. “We had a lot of meetings and talked about the concept and eventually came up with this concept. It has to feel like there is meaning in it. Theater can be a mirror or a window. We wanted a fun show with a little bit of gravity,” Josh said.

Eventually, the story unfolded. You meet two millennials who have no time to have brunch with their friends. They meet overzealous “bartenders” who give them the history of some breakfast cocktails, why brunch evolved…and why it doesn’t have to be boujee and dumb, but should be treated as a way to reconnect with friends and family in this really busy world.

Josh said, “his goal when writing the songs for the show was to bridge the technical with the emotional realms of music. You need the mind/ body connection when you create art. I looked at great symphonies of the past. They feel like a full meal. You get all of the different flavors. In our show, we are limited; we don’t have an orchestra and only have four people. I wanted to make sure not all of the songs sounded the same. We didn’t want it to be all sweet. We needed vinegar, salt, a balance of all the different flavors like the drinks themselves.”

While watching the show, you can enjoy a Bloody Mary, an Irish Coffee, and a Peach Bellini. The show is entertaining and you can’t help but wonder what’s next. Well…Christmas Carols. Tickets for The Imbible  Presents Christmas Carol Cocktails at The Producers Theater in NYC are on sale now. Reformed Scrooge wants to throw a party and gets visited by ghosts that give him cocktail recipes. As arranger, Josh made these traditional songs his own.

You can bet “Un-Block The Music” is going. For more information, go to:

https://imbible.nyc/christmas-carol-cocktails/. This show runs through December 28.  The Imbible’s fourth show, Rum and Pirates is on hiatus during the holidays, but will return in 2020. Check back at a later date for more on this show.

Once again, the Leonard Cohen song, Hallelujah appears to Un-Block The Music…if you read this blog you know what I am talking about. If not, go back and read Dave Aude Thrills With #1 Dance Remixes, Sometimes From Unlikely Sources https://unblockthemusic.blog/2019/10/23/dave-aude-thrills-with-1-dance-remixes-sometimes-from-unlikely-sources/