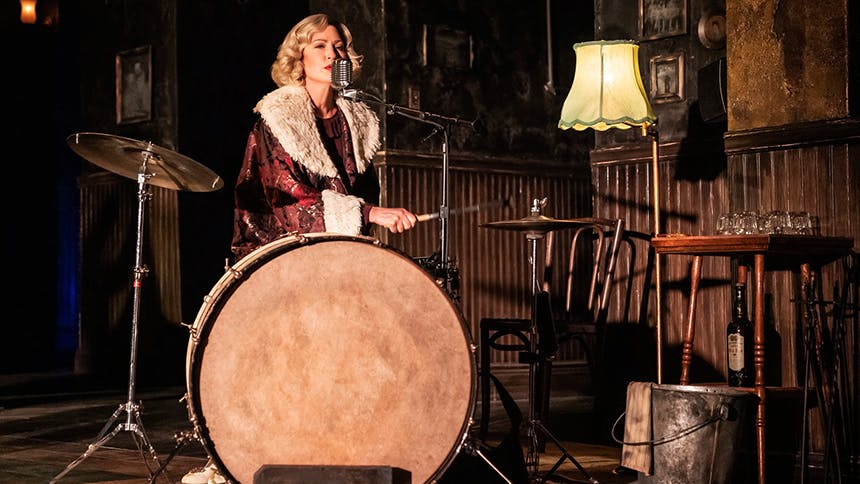 For those that know me, you know I like to talk and not text or email! However, as much as “Un-Block The Music” denounces computer takeover of our lives, I am sure happy we have had computers this year! How would we have ever made it through shutdown without Tik Tok, musical livestreams and of course this blog???!!! All kidding aside, I want to point you to the livestream concert of Luba Mason’s “Triangle In Concert” on November 20 at 9 pm. Here is the link: https://events.broadwayworld.com/event/luba-masons-triangle-in-concert-11-20-9-pm-et/

“Un-Block The Music” teased Luba as a “Women Wednesday” subject when she released the album “Triangle” about a month ago. We had such a great conversation at that time, and I wanted to share it with you now. (https://unblockthemusic.blog/2020/10/22/girl-from-north-countrys-luba-mason-drops-eclectic-new-album-tomorrow/)

Like many Americans, Luba’s parents were immigrants. While the focus of their lives was to put a roof over their family’s heads and food on the table, Luba said they were musically inclined. When they were able, however, they wanted to provide their daughters with opportunities in the arts including ballet lessons and learning an instrument. At 5 years old, Luba started piano lessons. She excelled! “And, I liked the attention,” she said.  When her sister started studying opera, she became interested in voice as well. “I listened to the radio, bought sheet music and started belting at the top of my lungs while accompanying myself on the piano. Playing piano alone wasn’t as much fun. I realized that I really liked to sing.”

In 5th grade, Luba’s godmother brought her to Broadway for the first time, The Magic Show with Doug Henning. Ann Reinking (Chicago) was one of the program’s special guests. “When I saw that show, I flipped. I saw this live performance which was a combination of singing, acting, dancing. Those were all of the things I loved to do. It took over my mind, and it became my dream to be on Broadway!”

Luba, who graduated from Circle In The Square Theater School, just started her 9th Broadway show just as the shutdown happened in March. That show is Girl From The North Country, written by Conor McPherson with music by Bob Dylan. It had been 15 years since she last starred on Broadway in Chicago!

This new role didn’t come easy. If you know any actors personally, you know they will go to the ends of the earth to get a job. Luba got a callback (which is like a second audition). She sang and read a scene. Then the director asked if she could play an instrument. We all know she excels at piano, but they wanted her to play the drums! “I said… ‘sure, of course!’ I walked out and panicked when I thought about the reality!”

Luba got the part.  She took drum lessons. “We started rehearsal after I only had two lessons. The second rehearsal ran until around 5 o’clock, and then the director said, ‘ok…we have done enough work today. Everybody can go…except for Luba. He looked at me and said ‘we are going to jam!’”

“The director comes over to the drum kit with his guitar.  The musical director schleps the piano over. The musical arranger is sitting right behind me. They started playing a song. I was sweating. Luckily, I wore a cotton shirt and you couldn’t see it soaking through. I was thinking, ‘I am I going to get fired!’ But it actually went well…even though I sweated off 5 pounds!,” she laughed. “My heart pumps during that portion of every show every time, but I am proud of myself!”

At one point in her career, Luba and her husband, Salsa/Latin icon Ruben Blades moved to Los Angeles where she worked in television and film. She wanted to do more, so Ruben suggested recording. “Recording is a whole other world, and it is very gratifying,’ she said. She recording two albums there.

In 2018, she recorded “Triangle” in New York at the famed Power Station studio. (https://unblockthemusic.blog/2018/09/11/berkleenycs-redesign-of-famed-power-station-to-breathe-life-into-the-studio-business-education/). She was waiting for Girl From The North Country to open before releasing it so she could ride on the show’s coattails. Then came the shutdown. “I was sitting around in CO-VID time and I thought ‘why don’t I release my album? People are at home; I may get some attention.” She has.

With all of Luba’s albums, she has taken a risk. Her music is not mainstream. In  fact, she trademarked her own genre, Mixtura. Her material, produced by longtime Prince collaborator Renato Neto is diverse. This album, for example, includes pop classics by the Beatles and Paul Simon. Then, there is a Monk standard, a Slovak folk song, a recent Broadway hit, a song by Brazilian legend Antonio Carlos Jobim and another by heavy metal band System of a Down.

“Mixtura,” she said, “is a minimalistic approach to music. It’s very simple, pure and refreshing. Music today is so produced…so many drum machines…and voice and instruments.” She offers the example of Miley Cyrus. When she heard her voice stripped down, Luba realized Miley had a great voice and style which , she says, is overshadowed by being overly produced. “She is a great talent!”

Like “Un-Block The Music,” Mixtura challenges “the pigeon hole” so to speak. Luba said, “I wanted to challenge or change the accepted musical format that tells us we need to record or perform one genre. I wanted Mixtura to be an art in complete freedom!”  I can relate! As a blogger, I want to write about ALL music!

In the past, when Luba released an album, she would tour, but aside from CO-VID restrictions, money restrictions are a thing as well.  Luba said, “It’ s expensive to keep up a six-piece band, but Renato suggested downsizing to a trio.  ‘I thought, everybody does that.’”  But Renato suggested a twist. He said, “’why don’t you do a vibraphone and bass?’ I didn’t think it had ever been done. That attracted me the most. I thought this could be groundbreaking.” “Un-Block The Music” agrees!!! You can check that out on the upcoming livestream.

While Luba continues to promote her album, she hasn’t forgotten about Broadway. She is waiting patiently for live theater to return. She doesn’t want to wait 15 years for her next show. In addition to Girl From The North Country, she is also involved with the upcoming Huey Lewis musical Heart of Rock And Roll. “Un-Block The Music” is waiting impatiently!

Anyway, Luba is the first woman interviewed under the new column title “Women Wonders.” Why wait til Wednesday if I have someone to write about??? Email me thoughts, or even interview suggestions.! Looking forward to hearing from you..dgalanteblock@gmail.com